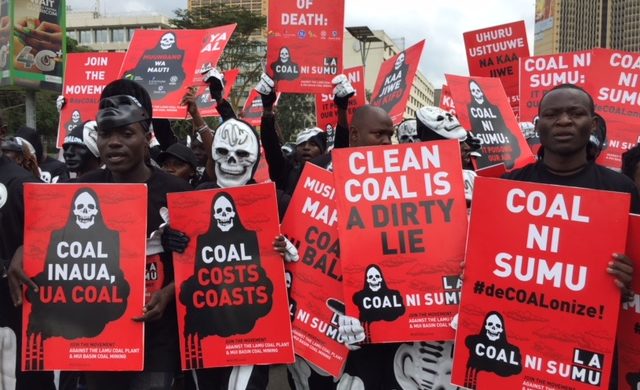 On July 26, 2019, Kenya’s National Environmental tribunal ruled that the environmental and social impact assessment (ESIA) license for the Lamu coal fired power plant in Kenya was insufficient and that the construction had to be stopped.

While this ruling explicitly states that this is not a legal case against coal-fired power plants, it nevertheless comes after 3 years of intense campaigning against what would be Kenya’s first coal-fired power plant: local NGOs and stakeholder groups organized under the deCOALonize umbrella and brought the legal case against the power plant’s consortium and the Kenyan government agency that issued the ESIA license in the first place.

On the world’s stage, Chinese, Japanese, Korean and American were among the top investors and engineering, procurement and construction companies (EPCs) to invest in coal-fired power plants. In 2018, of the 399 GW of coal-fired power plants under development outside of China, Chinese financial institutions and corporations have committed or offered funding for 102 GW coal-fired power worth US$ 35.9 billion.

At the same time, the cost of renewable energies have made coal-fired power plants increasingly uncompetitive. According to a study by Lazard, annualized levelized cost of energy (LCOE) for solar photovoltaic and wind energy have dropped by 88% and 69% respectively from 2009 to 2018, while these costs for coal and nuclear have increased by 9% and 23% respectively (see Figure 2). This risks that energy from most coal-fired power plants will be more costly than renewable energy.

But with energy consumption growing by 272% from 2,93 TWh in 1990 to 7,98 TWh in 2016, the Kenyan government saw a need to improve its energy supply: Based on the 2011 Least Cost Power Development Plan (LCPDP) issued by the Energy Regulation Commission (ERC), a semi-autonomous unit of Kenya’s Ministry of Energy, Kenya forecasted a 13,4% annual energy demand load growth and a 11,4% average annual peak demand load growth.

The plant was to supply 1,050 MW of energy, first with imported coal from South Africa and Zimbabwe and later with the newly discovered coal reserves in Kenya’s Kitui county Mui Basin.

The Industrial and Commercial Bank of China (ICBC) and the consortium signed the financing agreement for the project on June 8, 2015. According to this agreement, ICBC would arrange around 900 million USD export credit financing and would also serve as the financial advisor for the project. Accordingly, the Lamu project would be funded through 75% debt and 25% equity. Construction start date was set to September 2015 and the power plant was expected to be finished within 30 months by about 3,000 workers, including 1,400 Chinese workers.

The difference between a political agreement and a license

Before construction could start and the power generation license could be given, an environmental and social impact assessment (ESIA) needed to be undertaken with the goal to prove protection of basic environmental and social safeguards. AMU Power Company engaged Kurrent Technologies Limited to undertake the ESIA. The purpose of an ESIA process was to assist a country in ensuring social and environmental sustainability when commissioning projects, in line with the United Nations (UN) Sustainable Development Goals (SDGs).

In this process, stakeholder groups, such as Save Lamu, a coalition of 30 community organizations objected many of the claims of how Lamu would improve local lives. Save Lamu’s leader Omar Elmawi argued:

“We at Save Lamu we are totally pro renewables and anti coal. There is nothing at all as ‘clean coal’. Coal is dirty energy, and by all means we strongly campaign against any plans to build a coal plant in Lamu”. (Source)

The consortium also ran into problems for example with, e.g. land acquisition/land compensation. Only in September 2016, the National Environmental Management Authority (NEMA) issued the Environmental Impact Assessment License to AMU Power Company based on the ESIA. In February 2017, the Energy Regulatory Commission (ERC) of Kenya argued that all environmental, technical and economic issues raised by Save Lamu had been addressed and approved the construction of the project. Immediately, Save Lamu filed a lawsuit against AMU Power Company and the National Environmental Management Authority (NEMA) for not following the procedures and obtaining the ESIA license unlawfully.

Nevertheless, in May 2017, negotiations for the power purchase agreement (PPA) reached their conclusion: Amu Power and China Power Global signed a $1,9 billion power PPA. And finally, in June 2017, construction of the Lamu project started.

Yet, pressure kept mounting – both through regular protests and demostrations in Kenya, but also due to international scrutiny: four US senators urged the African Development Bank to not invest in the Lamu coal fired power plant due to ecological reasons and many large investors urged the American conglomerate GE not to invest its money into Lamu.

Also, due to slower than expected energy demand growth, the Energy Regulatory Commission (ERC) of Kenya instructed AMU Power to half Lamu’s capacity for its 3 stages, from 350 MW to 150-200 MW. As a result of lower usage of capacity and thus lower efficiency, the average cost for a kWh produced at Lamu would go as high as 75 US cent – 10 times as much as its cost at full utilization (see Figure 5). As a consequence, retail prices for electricity in Kenya would increase beyond what was forecasted.

On July 26, 2019, the court decreed that the environmental and social impact assessment (ESIA) license was not given according to the law, as both the consortium and the NEMA failed to follow procedures for stakeholder participation and missed to properly evaluate alternatives. With this, it effectively stopped the construction of the power plant as long as the grievances were not fully addressed.

Overall, while the court did not rule on the viability of coal fired power plants, investors of the plant could be rightfully worried: costs of the project continued to rise while the project had actually not even commenced.

For investors from China or elsewhere, the Lamu coal fired power plant can serve as an important learning example: while the national government originally both supported the construction of a coal-fired power plant and issued all licenses (albeit with delay), local environmental and social activism can derail investment projects. For investors this means: